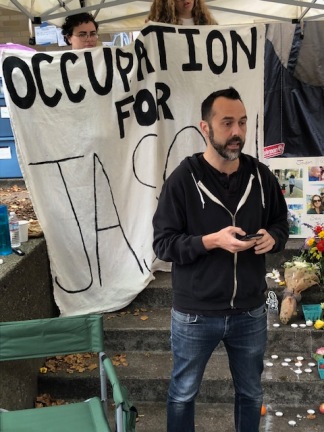 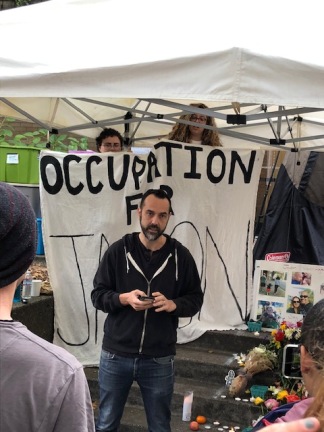 My name is Ben Anderson-Nathe. I’m a professor and program director in Child, Youth, and Family Studies and an affiliate faculty member in the Department of Women, Gender, and Sexualities Studies. I came to PSU in 2004, and I don’t plan to leave it until I retire in 2034.

I want to direct my comments to two audiences. The first is simple. To you, PSU students, I want to say thank you for your tireless work. It is an honor to be with you in this place. Know that your faculty see you. We stand with you.

The second message goes to our administration, past and present. I will start with the man I hold most responsible for the senseless killing of Jason Washington, the man who has most effectively dodged any public responsibility or accountability for his behavior: former PSU President Wim Wiewel.

I believe it was in his December 1, 2014 address to Faculty Senate, in which he tried to cow Senators into voting down a resolution brought before them to oppose armament, President Wiewel dismissed outright the warnings that militarizing our campus would result in loss of life – most probably in the killing of the most vulnerable members of this community. Over and over, he said, “Not on my watch.” Well, turns out he was right.

President Wiewel, I want you to know that we watched you when you said “not on my watch,” and then disappeared to the comforts of a more elite institution in the SW hills. We have watched and waited for your response to what you created. We are still watching.

We watched when our administration used institutional power and hierarchy to pressure those organizations and centers on campus that serve our most vulnerable to come out in public support of a policy many of their staff said privately they found dangerous and repugnant.

We watched at Trustees’ meetings when Trustees and University administration shut down public comment while allowing themselves endless time for hyperbole and showboating. We watched when those meetings were moved away from the public they are meant to serve.

We watched when the student demonstration, student activism, which we take great pride in teaching is the embodiment of engagement, of knowledge serving the city), when that activism resulted in students being threatened with academic sanctions for having to comply with the directive of a university official.”

We watched when Professor Maude Hines, a Trustee then and still on the board now, drew on her discipline when she said, “We know in the study of literature that if a gun is introduced in the first Act, it’ll be used in the third.” We watched Professor Hines courageously stand for the community she loves and vote NO.

And now a man is dead.

We faculty have watched. We have written. We have marched. We have testified. We have stood with students and with our staff colleagues. We will continue to stand that watch.

In that same December 1, 2014 address to Faculty Senate, President Wiewel actually told the faculty that we needed to act, that < I’m quoting from the minutes now of that meeting) discussion would only yield continued stress and aggravation” though killing a man does not) and he the argument for voting for the world we might ideally want to live in.” He urged Senators not to support the resolution. And of course, he lost: 69% of Senators voted against militarizing our campus one quarter voted with the President).

President Wiewel is now conveniently gone. We have new leadership, many new faces on the Board, many new students. While no one who knows me would call me an optimistic person, I want to believe these new faces will make new decisions, will chart a course that brings our administration back in line with the highest potential of our institution.

But if you do not, I want to say to you: You may try to bully or wait out your students. You may try to stall until the 24-hour news cycle pulls public attention elsewhere. But I assure you: your faculty have been here before you and will be here after you are gone. We will stand in the tradition of academic freedom which allows us to speak truth to power.